Here are the words from the subject with more details and in a different order.

Nashville is different. The pride parade is sponsored by Nissan and Dollar General, among others, and populated, in part, by politico’s passing out stickers. I don’t know what the pride parade used to be like (as I didn’t take part in one until I had left Nashville for Seoul), but I imagine it wasn’t such a welcoming atmosphere a few years ago. Yesterday, though, the sky was blue, the streets full of rainbows and cheers.

Also. Nashville has a lot more coffee than before. There’s Dose out on the west-side, Barista to the east, 8th and Roast to the south, and Louisville to the north, and a growing plethora in between. I love to work in Roast because it’s small, quiet, and full of old light. 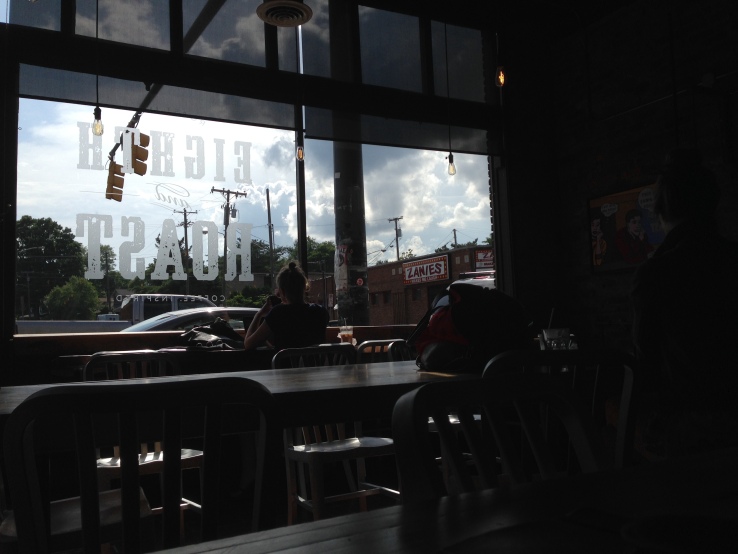 I love to talk and eat in Barista, because it’s big, bustling, and there are gluten-free biscuits. Roast took its tables from a bowling alley. Barista took its space from an old garage.

I remember when Nashville was different, when it wasn’t the it town, when pride marches weren’t sponsored by Dollar General, which is to say that every time I come back to Nashville I realize that I’m old and I feel sadhappy at the chance to experience change.

This week, I visited my old home and saw this.

This was to be expected as new people are going to live in this house and not be related to me or my sister. I was sad when my Mom died. Looking at the house where she and I and her parents used to live, I don’t feel sad. A part of me feels excited at what change will bring to this place. Mom and sister wanted to see it changed. They dreamed about what it could be. Now someone will see that dream happen. And so can we.

My home is somewhere else now, and with someone else. That is how time works. Also airplanes. I’m not sure what I’m saying just yet. Maybe it will come to me.

Here’s something my Dad used to say: “I’ve had my adventures. Now it’s your turn.”

Nashville has always been good at music. Earlier this week, we saw the Song Suffragettes at the Listening Room Cafe.

Also, next month, on July 13th, you can buy an anthology from Little Bird Publishing what contains many wonderful dark YA fairy tales including one from me. I will remind you again later.