Recently, the illustrative, award-winning Lara Donnelly (@larazontally), who was invited by the structurally inventive, award-winning Carmen Machado (@carmenmachado), invited me to participate in the “My Writing Process Blog Tour.” I have in turn invited the awesomes of Luke Pebler and A.S. Moser.

1) What are you working on?

A couple of things. 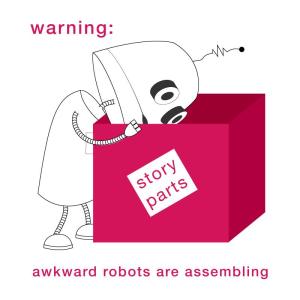 The first thing being that my Clarion class, otherwise known as the Awkward Robots, is putting together an anthology of stories, called the Red Volume, to benefit the Clarion Foundation. There’s a story dancing around in my brain that I might include. Something along the lines of Buffy the Vampire Slayer’s “Once More with Feeling,” but with more ghosts and rodeo clowns. The idea occurred to me while at Clarion when Walter Jon Williams asked me to write about rodeo clowns. I don’t know why he suggested this, nor why I decided that the best way to go about this was to write a musical. I do know that this decision led me to visiting the Geisel library and checking out all the books about musicals and rodeos, which proved a pretty awesome pairing. I read a lot. So much that the story ended up being drafted over the course of one long night, as the first draft of my stories often do, and haven’t touched it since. It occurred to me to give it a look after watching Singin’ in the Rain with the aforementioned Lara Donnelly whilst she visited me in Nashville.

The second thing being a second draft of a novel of revolution, love, and k-pop, whose first draft I began at the tail end of my time teaching English in Seoul. The first draft was written over a period of 18 months that included me moving back from Korea by way of a six-week jaunt around India and also caring for my mother who died, as mothers often do, and I’m afraid that the tone is a bit janky and in need of work. I’m fairly certain, too, that I should add some things that I forgot in the first draft, such as motivation, particularly for the revolution. I’ve never written about revolutions before. They seem complicated.

2) How does your work differ from others’ in the genre?

I’m not entirely sure.

If I could make up my own question, such as, “What inspires me?”, that would be simpler. I could answer this one without too terribly much thought. Hours spent absorbing the absurd, often meta, logic of Looney Tunes and The Muppets. The romantic cynicism of the Princess Bride. The  ecstatic, heart-ending, sometimes never-ending prose of Michael Chabon. The nightmare-logic of Kelly Link. The elegiac wonder of Lord of the Rings. The wit and heartbreak of Buffy.

I could go on like this for a while, but I won’t, as it’s not really fair to answer other people’s questions by making up easier questions of your own and then answering them.

Here’s my answer to the real question. My writing differs from others’ work in the genre in that I wrote it. It contains my obsessions with gender, time travel, received narratives, romance, monsters, and a great deal of heart-based metaphors. I suppose I often love my monsters more than most. Monsters are people, too. It’s just that they’ve been ‘othered’ by mainstream narratives.

I’d much rather my characters understand their monsters than kill them.

I write what I write because it excites me, or scares me, or, hopefully, both. The first story I wrote that scared me was one called, “Monsters and Virgins.” It was about two children, around thirteen, and a game they played wherein the boy dressed as a monster and the girl, very much like Buffy, stabbed him in the heart, over and over. It scared me because it touched on feelings I felt at different times as a young boy, feelings that my desires were, in some way, monstrous. It excited me for many of the same reasons.

I write what I write because of what I read. When I first read Kelly Link, or Kevin Brockmeier, for example, I felt compelled to do what they did. I wanted to touch the magic that they touched.

All of these stories are about, in one manner or another, love and death, sex and pain, zombies and not zombies.

You can read my thoughts on magic and love here.

I write what I write because I’m confused and in love with the world and stories are the way I learn and love best.

This is what I wrote as the introduction to my MFA thesis named, Some Things About Love, Magic, and Hair.

Here are stories. They are, for the most part, about love. Sometimes there are zombies. Occasionally, people fly. I wrote them in hopes of capturing something of the absurdity and truth of existence. Mostly, though, I had fun. I hope you do, too.

I write what I write because in writing I want to bring the dead to life and bring the living to the dead.

When my father died a few years ago, I wrote his eulogy. I stayed up all night writing it. When I read what I wrote, it felt like my dad was there. It felt like magic.

4) How does your writing process work?

My writing process, such as it is, most often consists of me writing scenes, or dialogue, or lists, until something jumps out at me and I feel compelled to continue writing and exploring the world that grows out of the words. It’s not the most practical method. It often leads to my stories being told not so much in chronological order, as in emotional order. The scenes often end up ordered in the way they came to me in writing. Sometimes, though, I go back and move them around. When I’m writing I feel it’s my job to listen.

If I have to go back and move things around, it just means I didn’t listen well enough the first time around.

In terms of the act of writing, I love to write in the morning, after having had a bit of time to enjoy some tea or coffee and, more importantly, a chunk of reading. Reading opens me up to writing.

In terms of routines, I love them. Waking up and writing at the same time every day is meditation, a mindset attached to a physical activity. Sometimes, like now when I’m traveling, I don’t have the routine and I miss it and I worry that I WILL NEVER BE ABLE TO WRITE AGAIN. But, that’s silly. I know, whenever I have some time alone, and a blank piece of paper, it will be there, whatever it is that we call writing and which we dredge up out of whatever process works for us.

Those are some of my thoughts.

For further writing process thoughts, check out A.S. Moser and Luke Pebler, the aforementioned awesomes who will take a crack at writing about themselves next week.

Happy processes, readers, what processes it is that you process.

1 thought on “On Some Things About Things; Or, My Writing Process Blog Tour”