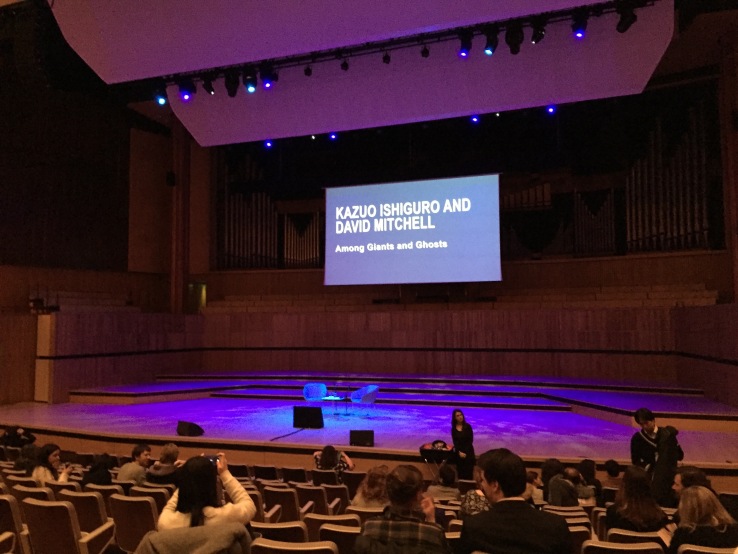 Last Wednessay, as part of a week-long cavalcade of birthday wonderfulness, EG took me to see Kazuo Ishiguro and David Mitchell in conversation at the Royal Festival Hall, part of the sprawling Southbank Centre located here in London along the Thames.

They sat across from each other, angled toward us, and spoke at length, and in glorious loops, about, among other things, stolen livers, almost beautiful Japanese ghosts, swordplay, film vs. writing, fear and courage, dungeons and dragons, the recklessness of youth, and the one thing Kazuo Ishiguro learned from War & Peace1.

They divided their conversation, for the most part otherwise improvised, among three topics, each introduced by a film clip2

I particularly enjoyed the way that Ishiguro ignored, throughout the evening, all of those beautifully appropriate hints for segues delivered by David Mitchell.

Here is a picture of some of my notes from the evening:

And here are some selections of those notes typed out such that they might appear somewhat more legible-like. (note: the quotes below should be read as a doubtful combination of scribbled notes, memory, and imagination).

The evening began with David Mitchell telling a story first told to him by his brother, of a boy named Dave who stole his dead uncle’s liver to sell to the butcher for money with which to buy sweets. In the end, the dead uncle creeps into the house, and up the stairs, and steals Dave’s liver and replaces it with sweets.

Kazuo Ishiguro responded that it was a really good story until it became horror.

KI: Horror. That’s valid and everything. But there is a different quality of fear with the supernatural. The story worked best at that moment of the voice calling out from the stairwell, “Dave. Dave.”

DM: When the ghost loses its ectoplasmic liminality, something more rational kicks in. Writing a ghost story is a high wire act.

He spoke, then, Ishiguro did, of the psychic experience you don’t want. Of how little he feared his liver being torn out, of whatever the ghost might do to you, and how much he feared reality’s distortion, of the loss of trust in, and control of, his senses.

KI: I don’t mind the horrible stuff. I’m afraid of waking up in the middle of the night and seeing the apparition. There’s an energy in ghost stories. Even in a crude form they can produce a strange reaction in people. People are haunted by them whether they want to be or not. I still aspire to that effect. I want people to be haunted.

KI: Japanese ghosts are really scary. Western ghosts not so much. Transparent people with chains.

KI:Japanese ghosts represent emotions so powerful that the normal physical laws don’t apply to them.

DI: They’re implacable. Like a sadistic mother. You’re constantly having to guess the rules. In folk tales, you have to ask the right god in the right way to get what you want, and then you must say thank you.

Also. It turns out that, for both writers, their earliest stories were ghost stories. The first four of Ishiguro’s published stories, in fact.

action on the page 4

I should point out there are few things more magnificent than listening to Kazuo Ishiguro refer to western-style sword-fighting as clinky, clonky affairs in which one has long conversations.

do you feel we are second best to cinema

After showing us a very brief, and very tense, Japanese sword-down, and asking David Mitchell the above question, Mitchell responded that really it depended on what result you desired.

DM: Once the gun goes off, the tension’s gone.

KI: Perhaps it’s psychological build-up, that’s where we have an advantage. Like in that moment where Kurosawa’s characters are staring at each other. You have to film an actor from the outside. Unless you do something very weird.

DM: Action’s actually kind of dull on the page. Rosemary Sutcliffe. I loved her fights. I remembered them as 20 pages long, but, when I looked back, whole battles, on which rested the fate of the world, lasted less than a page-and-a-half.

KI: You are peculiarly fearless. Do you have an idea that this setting or genre is so alien to my experience, that you don’t carry on?

DM: There’s a subdivision between genre and material. I’m attracted to genres that I’m not familiar with. As for material, you can always do it. But you have to do it sideways. Now, I wouldn’t do an American voice. A Brit who lived in the U.S. a long time, perhaps. Or a Canadian. a micro-note off is worse than being a whole octave off

KI: Would you write an African-american character?

DM: I’ve read too much Ta-Nehisi Coates to attempt that.

Kazuo Ishiguro has been keeping a notebook since 1981 in which he writes down all his ideas. 1981 is the year I was born. That means I am as old as Kazuo Ishiguro’s ideas.

KI: I backed off setting the book, Buried Giant, in Bosnia.

DM: I wouldn’t call that a cop-out. Just very sideways.

the doubtfulness of reality 5

DM: Why are so many of your characters not sure if they can trust their minds?

I don’t remember exactly how Kazuo Ishiguro answered this question, and my notes, such as they are, transition into WHAT AN AMAZING VERB REALIZED IS.

KI: And I realized. It’s a great verb to expedite things. You can use it in strange and promiscuous ways.

DM:To realize something includes an act of erasure. Cool verb. I’ve underrated it all my life.

DM: What’s the strangest thing you’ve ever been asked to sign?

KI: Nothing particularly strange. Why? Have you?

DM: A midriff. Don’t tell my wife. Later she got a tattoo. Maybe I shouldn’t have done that.

KI: I have been asked some pretty strange questions. Once, a woman stood up and told me, at extreme length, the situation at her office, and then she asked if I thought she should resign.

In a remarkable display of unconscious gender bias, all questions asked by the audience came from people identifying as female.

Here are the five questions asked and their respective answers.

KI: There’s a theme to this evening, I think. Fear and courage. Issues in writing. You have to be daring. Is fear too big a word?

DM: We live in a tiny world of calculated risks. You have to decide where courage will turn into hubris and get as close to that line as possible. Then write down descriptions of what seems so hard. Often you’ll find solutions in the description of what seems impossible.

And that, was the end, of that.

Happy whatever day this is where you are, readers.