Here is a picture of me dressed up as Doctor Who. 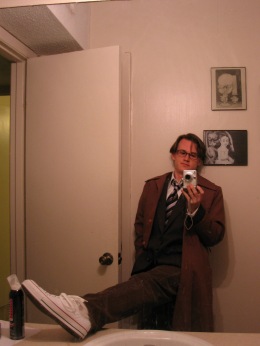 I never did quite manage to dress up as Rose. Perhaps, another day.

Once upon a time, my father told me that only people with no imagination possess no fear of the dark. This seemed wise to me at the time, especially as it was said by him as he rolled back into bed after having been sick as a result of chemo treatments and also cancer.

A lot of people describe horrible events as unimaginable, which is silly. What they mean, I think, is that very often the terrors we imagine have more to do with who we are and where we come from than the world we live in. By which I mean, my terrors tend to involve the dark and faces, which is a perfectly reasonable terror for a lonely boy who overheard his parents arguments and whose ancestors sat around a fire, afraid of loud noises and what might wait on the other side of the darkness, but in so many ways, the dark is a far less terrifying place than rolling back into your bed, sick from chemo, and pretty sure that soon you will be dead. But not a lot of people imagine the mundane moments of horror that intrude on our lives. It’s not that they’re unimaginable. It’s just that they don’t live as brightly in our imaginations as the devils and ghouls that more often haunt the darkness that haunts us, inside and out.

Sometimes, when I wake in the middle of the night, for just a moment, a shape, or a face, will peer in from the dark doorway, and a terror will grip my heart that I’m not alone. I know it isn’t real, but it feels real enough. In those moments, I think of what my dad said and the terror loosens and my heart beats a little easier. Something about how he shared his terror helps in those situations, as I hope, very much, that it helped him. Remembering his words means that he’s there in the dark with me, and I’m not alone. Some ghosts are worth not giving up.